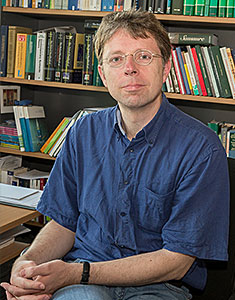 Senior Research Scientist
MPI for the Science of Human History

Martin Haspelmath is senior scientist at the Max Planck Institute for Evolutionary Anthropology and Honorary Professor at the Leipzig University, Germany. He received his Ph.D. from the Freie Universität Berlin and also spent time in Vienna, Cologne, Buffalo, Moscow, Bamberg and Pavia in his earlier career. His research is primarily in the area of broadly comparative and diachronic morphosyntax (Indefinite Pronouns, 1997; From Space to Time, 1997; Understanding Morphology, 2002) and in language contact (Loanwords in the World’s Languages, co-edited with Uri Tadmor, 2009). He is one of the editors of Oxford University Press’s World Atlas of Language Structures (2005), and of the recent Atlas of Pidgin and Creole Language Structures (2013).