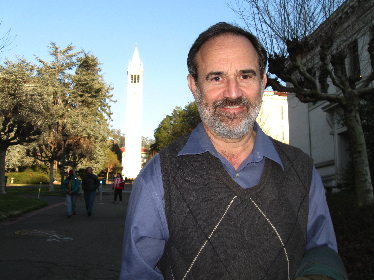 Professor of Linguistics and Executive Director, France-Berkeley Fund. Ph.D., Linguistics, University of California, Los Angeles, 1972. Except for a two-year leave with a Postdoctoral Fellowship from the Miller Institute for Basic Research in Science (U.C. Berkeley, 1973-1975), he taught at the University of Southern California from 1971 to 1988. He came to Berkeley's Department of Linguistics in 1988, which he chaired from 1991 to 2002. He has worked extensively on phonological theory and other aspects of language structure — particularly as concerns the history and description of the Niger-Congo languages of Africa, especially Bantu. He has published several books (e.g.Phonology Theory and Analysis, A Theory of Phonological Weight) and numerous theoretical articles in such journals asLanguage, Linguistic Inquiry, Natural Language and Linguistic Theory, Phonology, Studies in African Linguistics and Journal of African Languages and Linguistics. His current interests center around phonological theory, tone systems, and the comparative and historical study of the Bantu language family (of about 500 languages) for which he founded the Comparative Bantu On-Line Dictionary (CBOLD), with funding from the National Science Foundation and in collaboration with the Laboratoire Dynamique du Langage (CNRS/Université Lyon2), where he spent his 1995-96 sabbatical. Most recently he was International Chair of Quantitative and Experimental Linguistics and spend his Fall 2012 sabbatical in the Laboratoire de Phonétique et Phonology, Université de Paris 3.